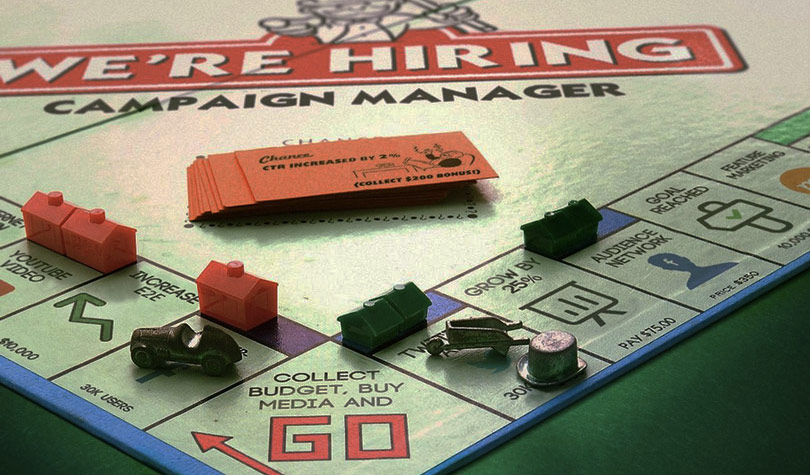 Some job announcements just aren’t as juicy as others. But if you’re finding that your ad campaigns and job posts aren’t bringing in the kind of candidates that you’d hoped, it may be time to get creative.

For inspiration, we found eight smart, eye-catching examples that will get your creative juices flowing. These companies not only managed to stand out from the crowd, but did so in a way that conveys their culture and shares their brand story. Take a look!

1. Twitter put out a call for a “Tweeter in Chief”

In 2019, Twitter put up a listing for an unusually titled job. The social media giant was looking for a “Tweeter in Chief.”

Once you get past the title, the job is actually pretty standard — Twitter just wanted someone to run its own official Twitter account. But a title like that commands you to stop and take notice, which is exactly the point. 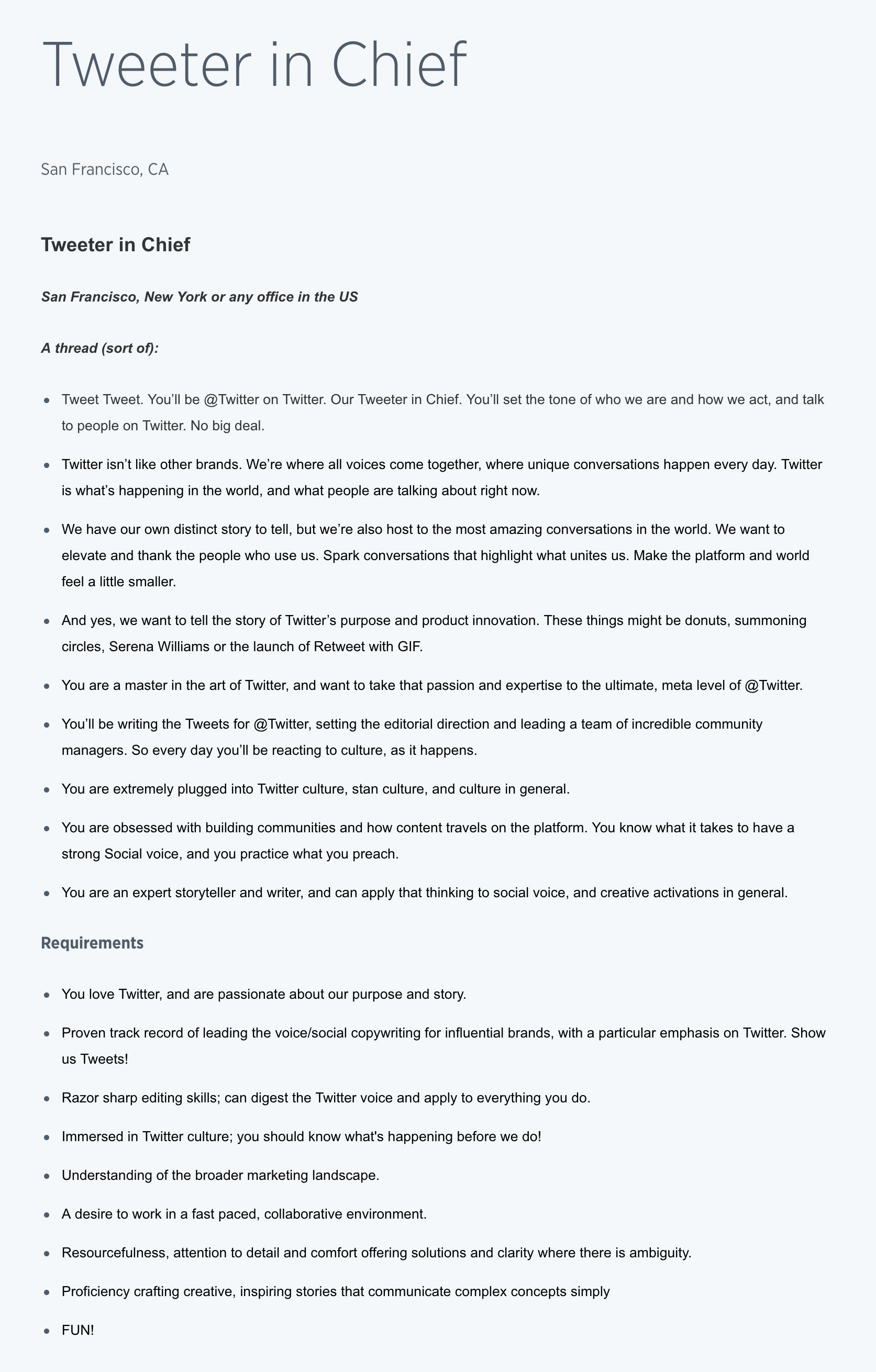 The listing itself also has its playful moments. On top of the requirements and responsibilities you might expect, Twitter points out that “You’ll set the tone of who we are and how we act, and talk to people on Twitter. No big deal.”

If you’re going to use a creative job title, make sure the rest of the job post conveys the same tone — otherwise, it could feel misleading. And if that tone doesn’t reflect your company culture, this technique might not be right for your company, so use it wisely.

2. Atlassian showed it knows employees have a life outside of work

Nearly half of all Americans have a side hustle, and even those that don’t have hobbies they’re passionate about. Atlassian knows that. The software company’s current career’s page puts employees’ extracurricular activities front and center. 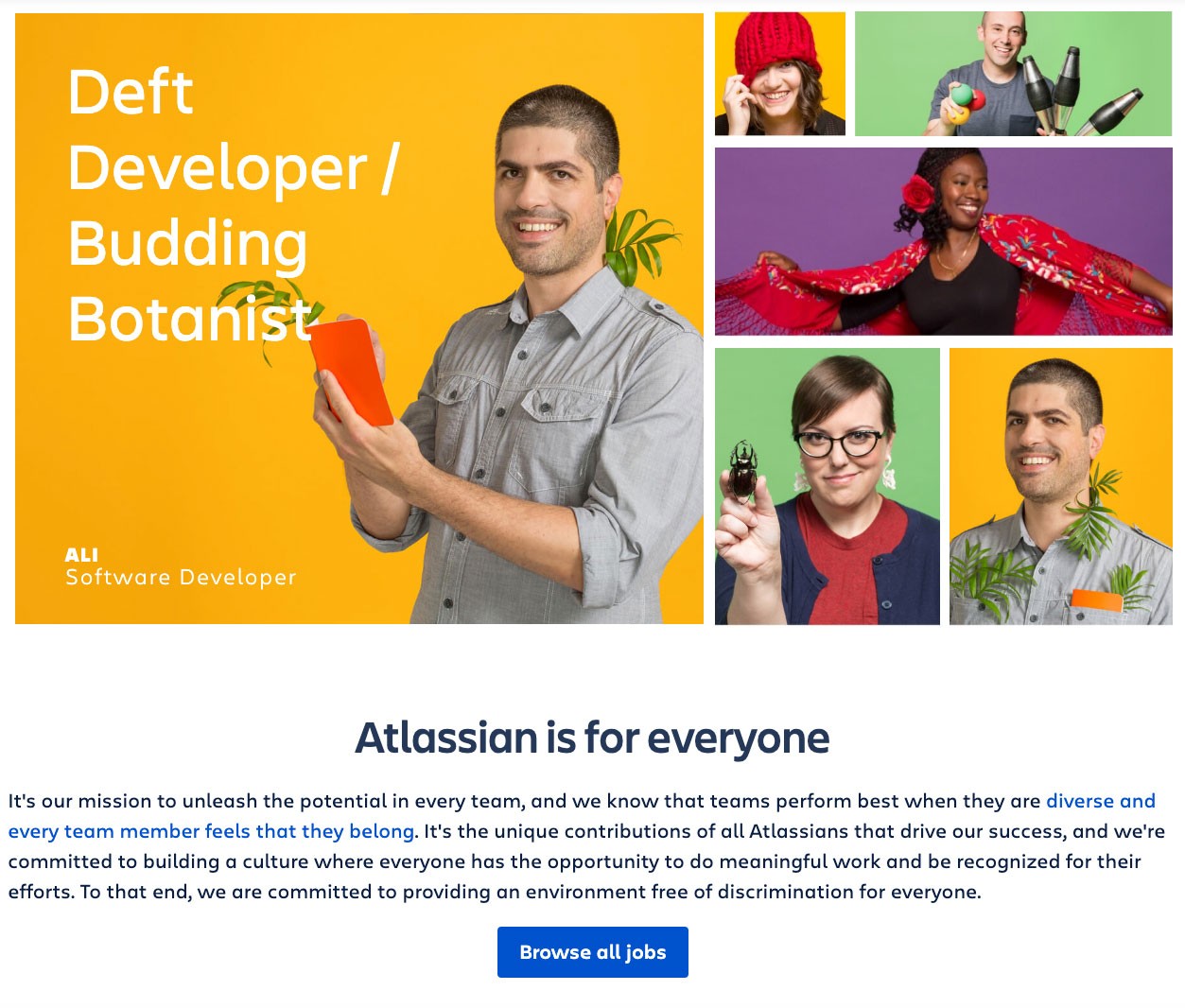 “It’s the unique contributions of all Atlassians that drive our success,” the company notes on its website.

Atlassian ties this back to its commitment to diversity and inclusion, stressing that people do their best work when they feel like they can be themselves, and that their diverse background and experiences make them stronger. But it also signals to candidates that Atlassian appreciates you’re more than your job — whether you’re a software developer and budding botanist or a technical writer who loves to knit.

Helping candidates feel seen as individuals is a good way to pique their interest. And if you can tie your campaigns back to your company’s overarching mission and values, your ads and job posts will be stronger for it.

3. IBM used infographics to get the point across quickly

They say a picture is worth a thousand words. And back in 2016, tech heavyweight IBM took this approach with its job posts, using infographics to help candidates gauge their fit at a glance.

These infographics quickly communicate make-or-break considerations, like the job’s location, compensation, and benefits. There are also blocks of text detailing the role and its requirements, but the bright colors and surrounding graphics help draw the reader’s eye. 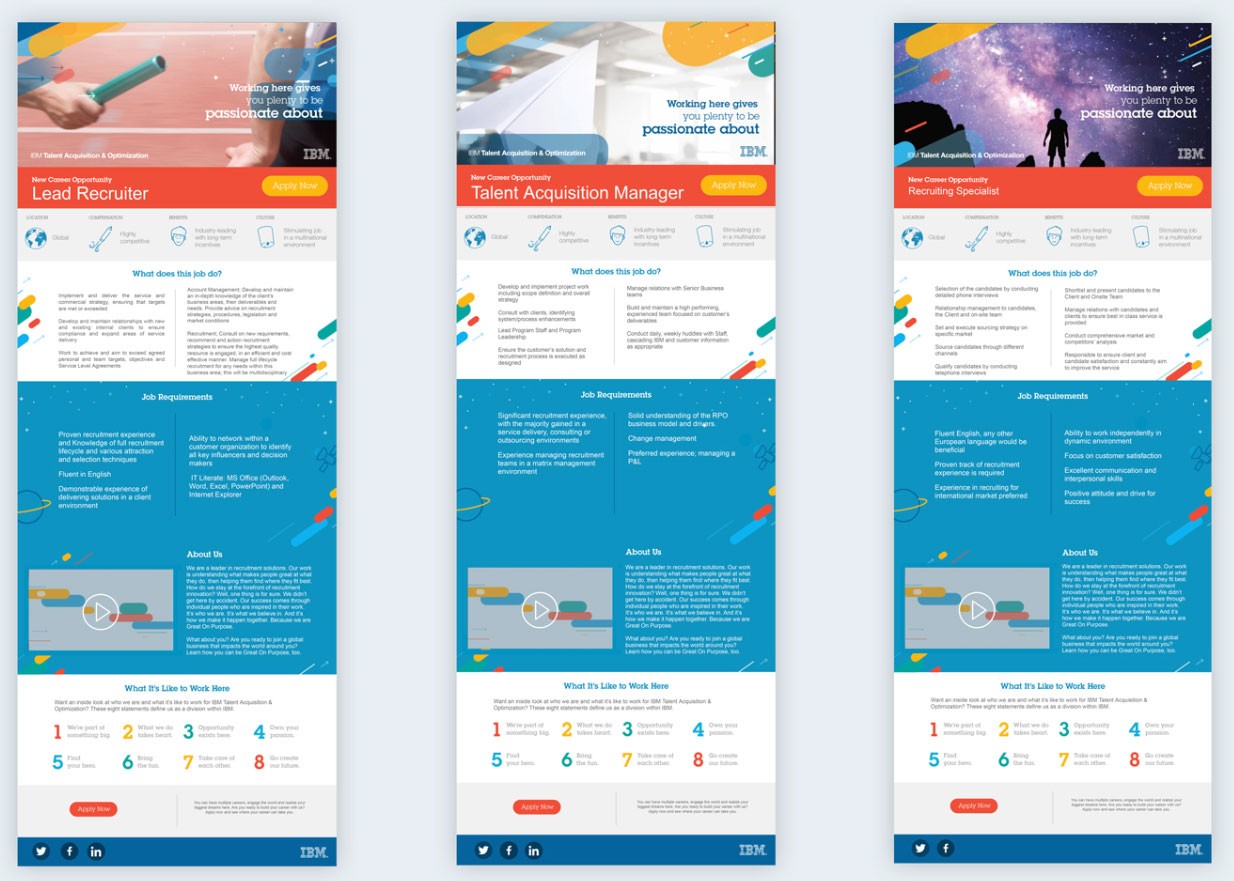 Visme, the design firm behind the infographics, says that IBM used to create text-heavy landing pages for each role. This was not only time-consuming — taking up to 72 hours for roles with unique needs — but also made it hard to share job posts across different channels. The infographics, on the other hand, take less than an hour to create and can be downloaded as images or PDFs. The team can also generate a link to quickly share them or embed them in an email.

Visme also notes that IBM has seen an uptick in qualified candidates applying for roles.

“Since it’s laid out in a very informative and easy-to-read way, the people that end up applying for the position are more applicable,” Visme writes. “It’s not people who just read the job title and think it’s relevant and then apply.”

Whether it’s an infographic or simple formatting choices like using bulleted lists, the way text is laid out on the page can greatly influence how many people read your post. Aim for straightforward, clutter-free layouts that allow your words to shine.

4. Everlane sent a minimalist message about its open and transparent culture

Clothing retailer Everlane prides itself on “radical transparency.” Prime example: on the store’s website, many cashmere products include a “Transparent Pricing” infographic that breaks down exactly how much the products cost to make. This open and honest spirit is also expressed in its recruitment marketing.

In a post shared to social media a few years ago, Everlane wrote: “We have 1 founder and 46 CEOs. Be the 47th.” The post was accompanied by an image of the company’s open office plan, which really does seem to reflect the flat hierarchy expressed in the caption.

In just a few words, Everlane managed to speak volumes about who they are and who they want to welcome aboard. The company has grown significantly since then — thanks, no doubt, to thoughtful, tailored posts like this. So, rather than expounding a hundred words, consider using 10 to say something that really matters.

5. Rise refused to be short and sweet — and stood out because of it

As a rule of thumb, short and sweet is usually preferable when it comes to job posts. But sometimes, you’ve got to march to the beat of your own drum. Rise, a sleep analytics startup, did just that with an incredibly long job post that doubled as a letter from its CEO.

Clocking in at more than 1,600 words, the job post covers everything from the company’s mission to the ways the job might evolve over time to the people the new hire would be working with (like an incredible designer named Churo). It also goes into detail about why the role might not be a great fit for some candidates. 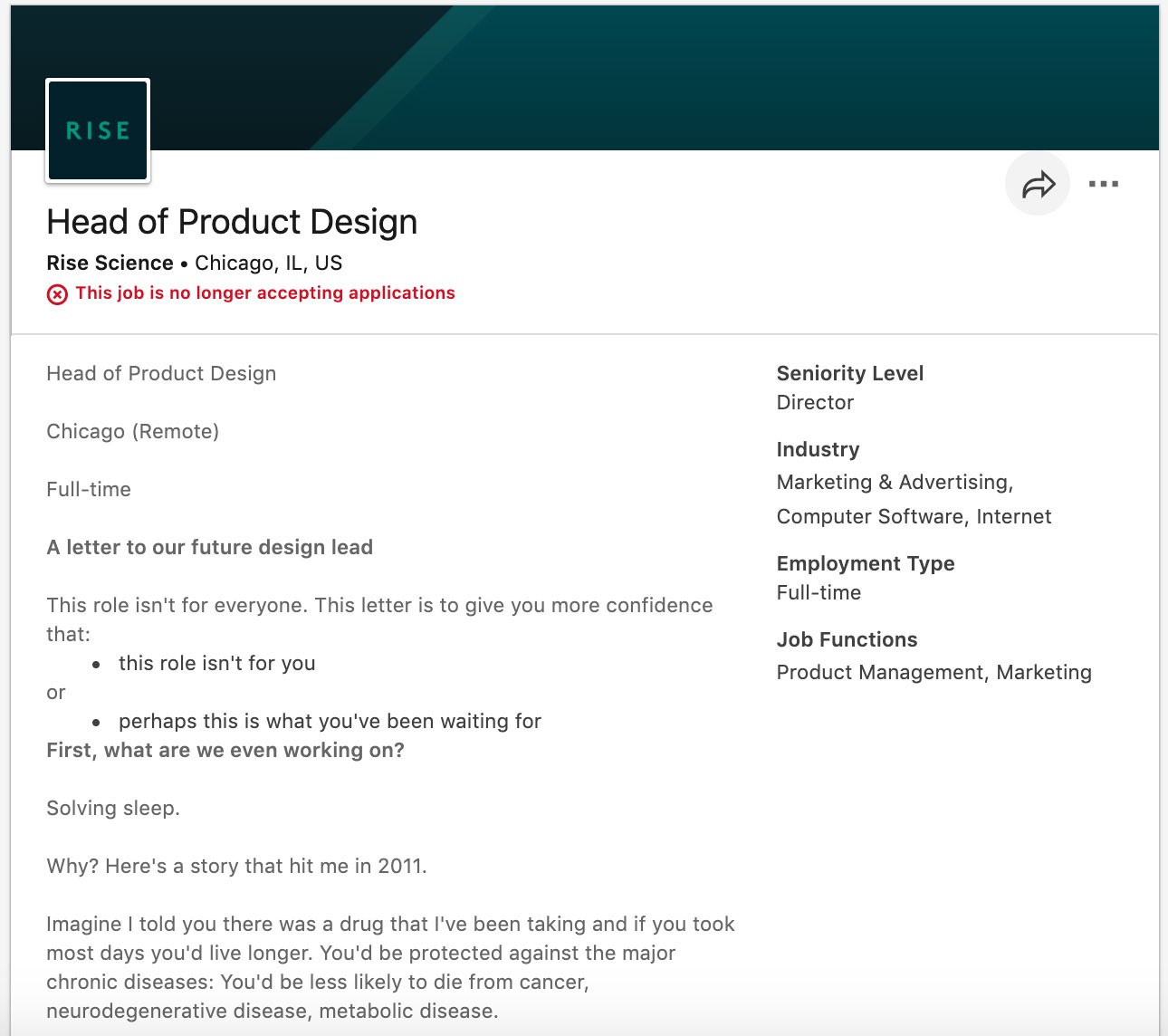 As the opening makes clear, the purpose of the “letter” is to either help candidates self-select out or realize it’s exactly what they’ve been looking for, which might not be possible in fewer words.

Going long can be a gamble. But if candidates do read to the end and feel inspired and empowered to apply, there’s a greater chance that it’s a role they’re really passionate about.

It’s also rare to see a job post written from the perspective of the CEO, which is sure to leave candidates curious. It makes the post feel more exclusive and impactful, like you’re being let in on something very important — which ties nicely into the company’s mission to solve sleep deprivation.

It’s worth asking the person who will be your new hire’s boss if you can write the job post in their voice. You could also work closely with them to write the post in tandem. This can instantly set your post apart from countless others vying for your candidates’ attention, giving them an inside look at the team they might be joining.

6. MailChimp isn’t afraid to throw in some fun and take things offline

Email marketing service MailChimp isn’t afraid to have a little fun with its ads. It once tested a Napoleon Dynamite-inspired ad to see if it would have an impact on attendance at an informal meet and greet. It did — the number of attendees nearly doubled compared to a previous event.

The company has also mastered creative campus recruitment. Notably, it once created job ads made to look like baseball cards that recruiters could hand out at job fairs.

The brilliance of these cards isn’t just that they’re memorable (although they are). They’re also the perfect size to slip into your pocket and rediscover later, causing candidates to take that much-needed second look.

MailChimp proves that you can get creative with your employer branding on and offline. So if your once-reliable methods for spreading the word aren’t working as well as you’d like, consider experimenting a little. Being just a wee bit playful can be more rewarding than it is risky.

7. MIT Media Lab defied expectations for a research facility by focusing on passion over qualifications

Higher education institutes don’t exactly have a reputation for being daring. Perhaps that’s why the Media Lab at MIT once put out an ad for an “undefined discipline” job that scatters any preconceived notions you might have about it in seconds.

MIT Media Lab catches the reader’s attention in a few interesting ways. First, the title prompts prospective candidates to keep reading the post to figure out exactly what it’s about. Then, it immediately shifts the focus from the candidate’s qualifications to their passions and potential — noting that the position has no “specific degree requirement,” but it does demand someone with a “fearless personality, boundless optimism, and desire to change the world.”

Perhaps the biggest surprise is MIT Media Lab’s willingness to detail the type of candidates it isn’t looking for, pointing out that “if you fit into typical academia, this is probably not the job for you.”

Using an unexpected approach to amp up the uniqueness of a role is a surefire way to stop a candidate in their tracks. This kind of post won’t appeal to everyone — but as the disclaimer makes clear, it isn’t supposed to.

Not every attention-grabbing tactic has to be particularly sophisticated or ground-breaking. Video hosting platform Vimeo once made snacks a prominent part of its appeal on its jobs landing page. 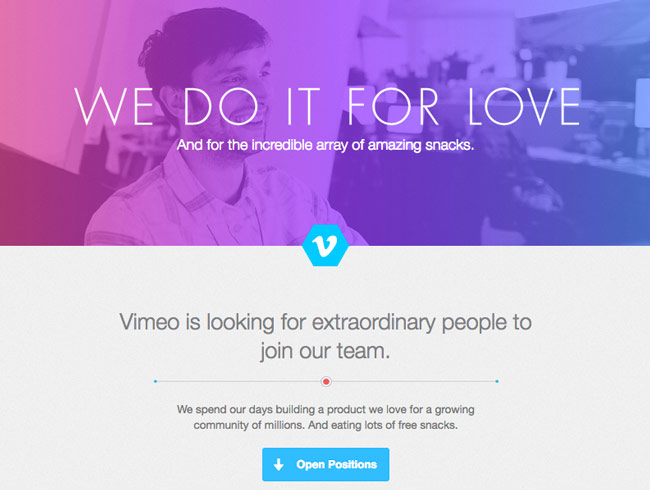 “We spend our days building a product we love for a growing community of millions. And eating lots of free snacks,” Vimeo wrote.

The company has since updated its careers page, adding details about other perks and benefits that candidates really care about, such as parental leave and tuition reimbursement. But snacks still get a tantalizing mention. 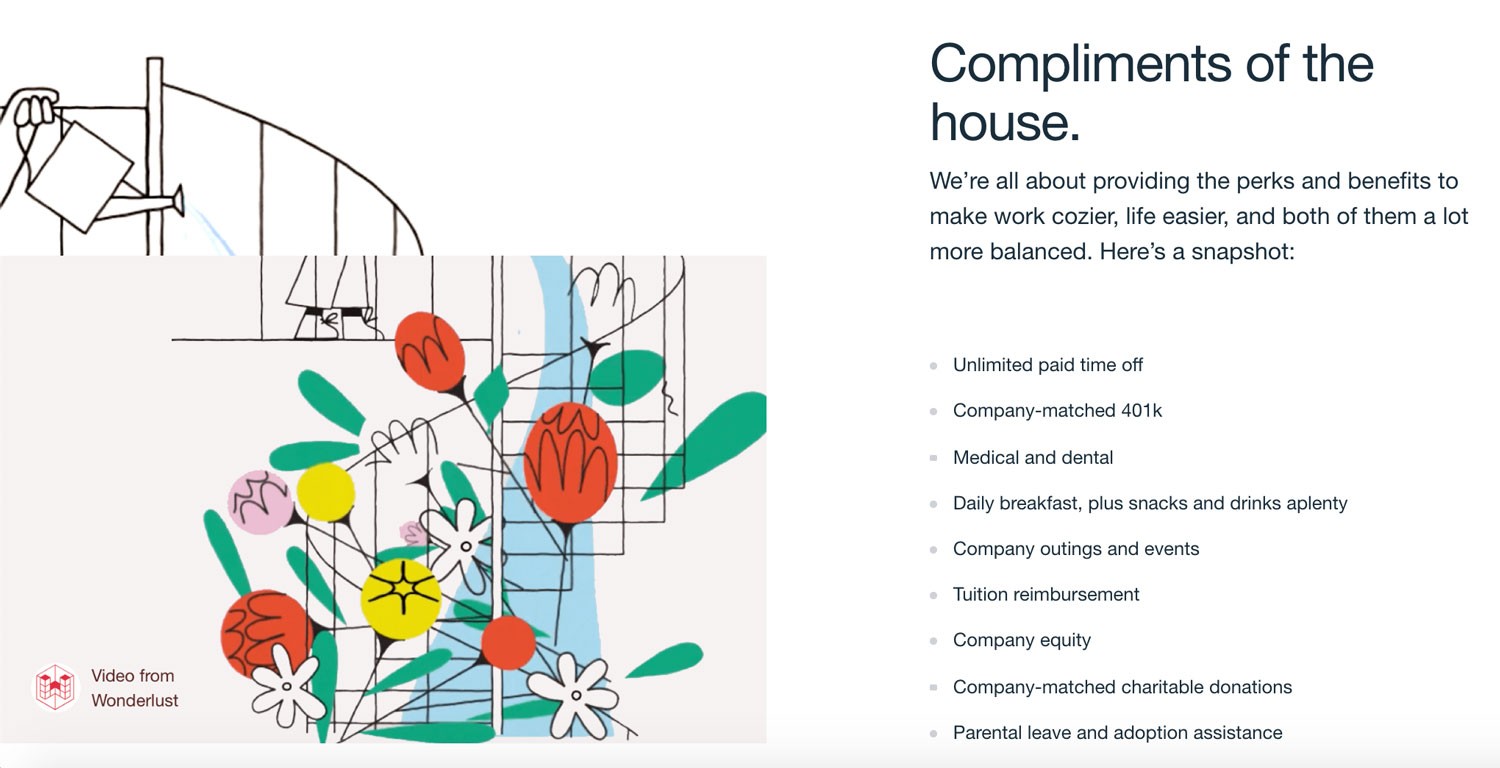 Candidates eat up these kinds of details (pardon the pun). So, if food is in any way a part of your benefits package, definitely let that be known, but don’t neglect to highlight the other benefits that candidates need to know about.

Final thoughts: Be different, but be meaningful

The most creative job posts aren’t just successful because they’re different. They’re also effective multitaskers, juggling the responsibility of announcing an opportunity with that of sharing the company’s culture in a fun, compelling fashion.

So don’t just be weird for the sake of being weird. Use your creative job post as the hook to draw candidates in — then give them a reason to hit “apply.”